Shortly after declaring that he went all-in on Solana (SOL), legendary boxer Mike Tyson is now asking his 5.7 million Twitter followers how high the price of the token could go.

As reported by U.Today, Tyson, who became the youngest heavyweight champion in history in 1986, also showed off his Catalina Whale non-fungible token that he bought on Solana-powered NFT marketplace Solsea. 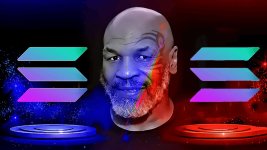