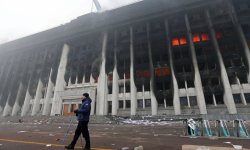 Unrest in the central Asian country – the second-largest centre for mining of the cryptocurrency – led to an internet blackout.

Bitcoin took a hit on Thursday after the internet in Kazakhstan was shut down amid intensifying violence.
The central Asian nation in recent days has been rocked by violent clashes between protesters, police and the army. The protests began in the west of the country over the weekend, after a sharp rise in fuel prices, and quickly spread through cities across the nation.

The internet was shut down nationwide on Wednesday. And though the intent appeared to be to disrupt the protesters’ communications, the effects of the blackout have spread further.
Kazakhstan is a power player in the bitcoin world. Last year, the nation became the world’s second-largest center for bitcoin mining after the United States, according to the Cambridge Centre for Alternative Finance, after China, a major hub, clamped down on crypto mining activity. As of August, Kazakhstan was hosting 18% of global bitcoin mining, according to Fortune.

Within the hours of the outage, bitcoin’s computational power sank.

Bitcoin and other cryptocurrencies are created or “mined” by high-powered computers, usually at data centers in different parts of the world that compete to solve complex mathematical puzzles in a highly energy-intensive process.

The more miners on the network, the greater the amount of computer power is needed to mine new bitcoin. The hashrate falls if miners drop off the network, in theory making it easier for the remaining miners to produce new coin.
The hashrate at major crypto mining pools – groups of miners in different locations that team up to produce bitcoin – was down 14% from Tuesday to Thursday, according to data from mining firm BTC.com.

Bitcoin’s price, too, took a plunge – a drop in hashrate doesn’t necessarily boost price. The cryptocurrency fell below $43,000 on Thursday, testing multi-month lows.

The outage emphasized how much weight Kazakhstan holds in the bitcoin ecosystem.

Economics aside, bitcoin’s negative environmental impact has been an ongoing issue. Blockchain-based currencies require large amounts of power, which is mostly derived from fossil fuels. And in Kazakhstan, specifically, the power behind bitcoin is cause for concern.
Coal is the main source of regional power. Kazakhstan’s crypto mining farms are mostly powered by ageing coal plants which themselves – along with coalmines and whole towns built around them – are a headache for authorities as they seek to decarbonize the economy. Since the old plants are inefficient and carbon-heavy, they generate an outsize amount of pollution.

According to the International Energy Agency, Kazakhstan’s emissions per energy unit are higher than what China’s used to be. The agency estimates that China’s coal emitted about 1,000g of CO2 a kilowatt hour, while Kazakhstan’s emits close to 1,500g.

The Kazakh government said last year it planned to crack down first on unregistered “grey” miners who it estimates might be consuming twice as much power as the “white” or officially registered ones.