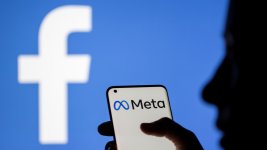 ​
It sounds like Meta is about to double down on its Metaverse bet.

According to a Financial Times report, the social media giant behind Facebook and Instagram is preparing to launch a feature that will let users display NFTs on their social media accounts. NFTs are tokenized assets that live on a blockchain like Ethereum or Solana. They can encompass digital art, music, memes, or other types of creative content. The technology hit the mainstream in 2021.

Unknown sources told Financial Times that Meta was working on a “prototype” of a marketplace where users will be able to buy, sell, and mint NFTs. It’s also reportedly set to add an NFT support function on user profiles. The report did not specify the blockchain network that Meta would use for the marketplace.

Today’s news follows multiple strategic moves to embrace blockchain technology from Mark Zuckerberg’s company. The firm made its intentions to explore crypto clear in June 2019 when it announced it would be launching a stablecoin called Libra, along with a crypto wallet called Novi. The project has had a rocky journey and has since been rebranded to Diem; it’s still yet to launch.

In August 2021, at the height of the NFT explosion, the former head of Facebook Finance David Marcus revealed tha the firm had been looking to support NFTs with its stablecoin wallet. It then memorably doubled down on its commitment to crypto when it rebranded to Meta in October as part of a mission to “bring the Metaverse to life.” While still an abstract concept, the Metaverse is typically discussed interchangeably with crypto, NFTs, and blockchain technology. It’s widely thought that blockchains like Ethereum will act as the base layer for the Metaverse and Web3.

If Meta creates an NFT marketplace as rumored, it will face stiff competition from OpenSea–the leading marketplace that traded over $14 billion in 2021. Coinbase is also due to launch an NFT marketplace imminently following the heels of other crypto exchanges; it’s confirmed that the marketplace will be designed “for social engagement” and this week announced that it would allow Mastercard payments. Reddit is also looking into launching a marketplace dedicated to non-fungibles.

Meta is the world’s largest social media company, overseeing Facebook, Instagram, and WhatsApp. As of the third quarter of 2021, it had at least 3.58 billion users worldwide. Meta’s reported foray into NFTs could be a major catalyst for mass adoption and help popularize the use of digital assets while creators artists a way to monetize their work.
Source
You must log in or register to reply here.
Share:
Vk Ok Blogger Linked In Diaspora Weibo Facebook Twitter Reddit Pinterest Tumblr WhatsApp Telegram Viber Skype Email Share Google Yahoo Evernote Xing Link
Private conversations
Help Users Options