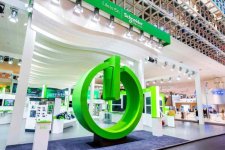 ​
VeChain confirmed the partnership through Twitter indicating that Schneider Electric will leverage its technology to digitize the economy. 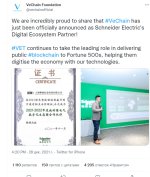 ​
Recently, VeChain has been teasing about a possible partnership with the blockchain-based company dominating the October 2021 Schneider Electric Green Innovation Summit in China.

The partnership elevates VeChain status as a blockchain company considering that Schneider Electric is a Fortune 500 company with a market capitalization of about $100 billion.


VeChain increases partnerships
​
In general, VeChain continues to make strides in partnering with various entities in the company’s quest to push for mainstream adoption of blockchain technology. For instance, VeChain also revealed that the government of Inner Mongolia would deploy VeChainThor blockchain to power a massive and complete traceability platform.

“We are proud to announce that the Government of Inner Mongolia, China, has chosen VeChainThor to power a massive, full traceability platform! This milestone, Government-led project is a massive step forward for VeChain and the mass adoption of blockchain,” VeChain Foundation said.
Click to expand...

Currently, the VeChain technology is deployed in several industries, including food safety, luxury goods, liquor, and agriculture. The platform aims to push for enterprise blockchain adoption by offering clients a system that combines the blockchain and smart chip technologies for tracking items.

At the same time, VeChain is also venturing into another crypto-related offering, having recently deployed a new decentralized exchange dubbed ZumoSwap. The DEX is designed as an alternative to Exchange, the network’s automated market maker (AMM), and liquidity provision protocol.

The series of new deals and partnerships appear to have minimal impact on VET, the platform’s native cryptocurrency. By press time, the token was trading at $0.085, dropping over 6% in the last 24 hours.

​
However, in recent days, VET’s price has increasingly remained almost stagnant despite other altcoins’ recording some form of recovery following the general market correction.