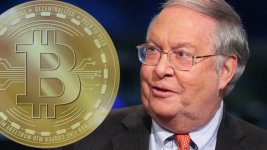 The mass adoption of the king coin is going great. This has been one of the most important goals that the crypto space has set and things are going on the right track.

Important investors are coming into the crypto space and this is the best thing that can happen. The latest reports are revealed by CoinDesk and they involve billionaire investor Bill Miller.

Bill Miller’s BTC investments
Market-beating fund manager and billionaire Bill Miller is so bullish on BTC that his investments tied closely to the crypto now represent 50% of his personal assets.

Miller became famous for beating the S&P 500 index for a record-breaking 15 years in a row from 1991-2005 as a fund manager at Legg Mason, according to the online publication mentioned above.

He has previously invested heavily in BTC in funds that he managed, but his revelation about his personal portfolio was new.

Miller said he personally started buying bitcoin at around $200 in 2014. This came after hearing a talk by Wences Casares, known as the “Patient Zero” of bitcoin for introducing it to Silicon Valley circles.

Despite the fact that he has 50% of his wealth into BTC, Miller’s advice for average investors is to put 1% of their net worth in Bitcoin.

“if you put 1% of your portfolio in it for diversification, even if it goes to zero, which I think is highly improbable, but of course possible, you can always afford to lose 1%.”

He continued and explained that BTC represents a unique investment.

“I think the average investor should ask himself or herself, what do you have in your portfolio that has that kind of track record – number one, is very, very under-penetrated; can provide a service of insurance against financial catastrophe that no one else can provide and can go up 10 times or 50 times? The answer is: nothing.”

At the moment of writing this article, BTC is trading it the green and the king coin is priced above $43k.